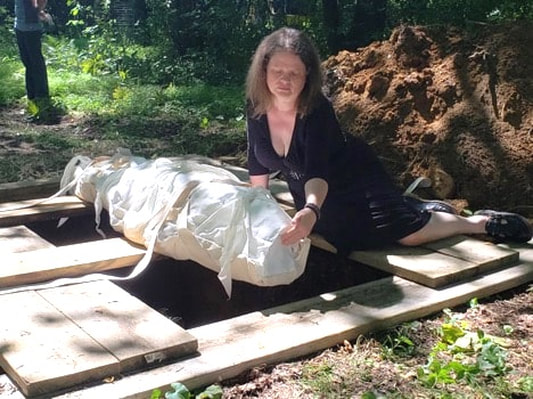 ​On June 9, 2019, Stephanie Edwards’ life changed forever. That was the day her beloved husband, Tom, died. Like many couples, she and Tom hadn’t discussed what kind of burial he would like, but once Stephanie started to research her options, natural burial became the obvious choice for them. It fit perfectly with Tom’s life.

Tom loved nature and trees. He chose a career that allowed him to be close with the natural world. It was during his time with the South Carolina Forestry Commission that he and Stephanie met. Together they lived a life that honored nature. They enjoyed hiking, organic food, and natural healing. Stephanie explained, “I believe that Tom would have appreciated the ecologically friendly process of this burial.” she said. The burial at Penn Forest also helped to fulfill one of Tom’s lifelong wishes, “Tom always wanted to live on a farm, and we were never able to make that happen. It is very meaningful to our family that there is a farm with farm animals at Penn Forest.”

Stephanie chose to have Tom buried in a clearing in the woods that she thought he would have liked. It was on the day of Tom’s burial that the family experienced a spiritual healing through his burial. Stephanie and her family were joined by Laura and Pete (Penn Forest staff) during their intimate service. Unlike many modern burials, they were able to take as much time at the grave as they wanted. She and her family lowered Tom into his grave. Afterward, they took handfuls and shovels of dirt and buried Tom. They each expressed how that process gave them a sense of healing, “Funerals have always been traumatic for me, but this was a beautiful, healing experience.”

Stephanie and her family are able to make visitations to Tom’s grave a family event, “We love going to Penn Forest to visit Tom’s grave because we can cut flowers for his grave, interact with the farm animals, hike the trails and have a picnic.” Through Penn Forest’s park, life is able to continue for not only Stephanie but, in a way, it continues for Tom through the nature that surrounds him.